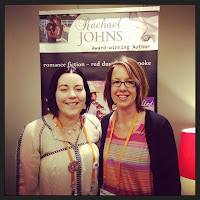 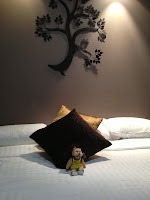 On the weekend I was lucky enough to go to the Romance Writers of Australia Conference. This year it was in Fremantle and they put on some wild wind and rain the first day but it gradually warmed up. I roomed with fab rural author Rachael Johns(see pic left) and had to take my little rockstar's netball beanie kid as she had a big netball final while I was away (right).

As a bit of an introvert (I'm used to my fictional worlds) I found the buzz of so many writers at once inspiring and exhausting - in a good way.

It was great to talk writing for a WHOLE WEEKEND. There were so many inspiring workshops and talks over the weekend and I scribbled so many notes I think it will take me weeks to go back through. 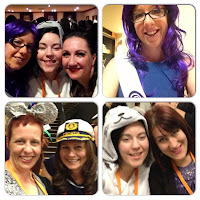 The social events were just as fun and I went for 'nice' on the Nautical or nice cocktail party on the Friday night. What could be nicer than a block of choc? And I got to wear purple hair! 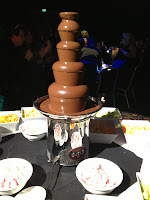 The awards gala was fabulous and included a choc fountain - sigh...

There were so many highlights but for me it was a late night chat (there were a few of those!!) where I was talking about one of my stories and the room of writers gave me bucket loads of encouragement. terms like 'awesome conflict' and 'I can't wait to read it' are things I'll treasure as I get stuck back in.

The organisers did an amazing job and I thanks them with virtual hugs and chocolate!!

Have you been to any conferences recently?

Posted by beck nicholas at 9:22 PM