On being a fan

Not me this time... or not exactly.
After 'seeing'/reading some of this author on twitter I was inspired to buy a certain little rockstar in my life Keeper of the Lost Cities by Shannon Messenger.

Twelve-year-old Sophie Foster has a secret. She’s a Telepath—someone who hears the thoughts of everyone around her. It’s a talent she’s never known how to explain.


Everything changes the day she meets Fitz, a mysterious boy who appears out of nowhere and also reads minds. She discovers there’s a place she does belong, and that staying with her family will place her in grave danger. In the blink of an eye, Sophie is forced to leave behind everything and start a new life in a place that is vastly different from anything she has ever known.
Sophie has new rules to learn and new skills to master, and not everyone is thrilled that she has come “home.” There are secrets buried deep in Sophie’s memory—secrets about who she really is and why she was hidden among humans—that other people desperately want. Would even kill for.In this page-turning debut, Shannon Messenger creates a riveting story where one girl must figure out why she is the key to her brand-new world, before the wrong person finds the answer first.

And she LOVED it. She's only just 8 and read in in a devouring rush of intense obsession I've only ever seen her have with music before (she is, after all, going to be a rockstar... or audiologist... or author when she grows up) and one other author.

She copied the title to put up on her wall and she drew picture after picture. And she's saving for the sequel.

This is her fan art.... fan art! I can hardly believe it of her. I promised I'd post it for Shannon's contest and she just hoped one of her fave authors might see it! 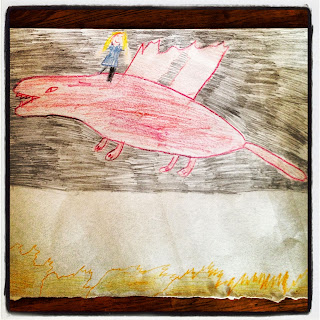 This is Sophie how Rockstar sees her.
I'm so glad she feels this way about books. I hope to make people feel this way about mine!!
=)﻿
Posted by beck nicholas at 2:45 AM